Invincible’s Finale Is The Most Brutal in Superhero TV

What We Know About Succession Season 3

4 Reasons Why You Need to Watch Demon Slayer: Kimestu No Yaiba

Rewriting Character Arcs: Why We Need the Loki Series

WandaVision was a gamble, bringing in two characters who both have extremely complicated histories to the forefront of their own series. Watching them in the Marvel Cinematic Universe, I could see that these two characters were brought in to fill the same shoes they filled in the comics, to be plot devices. When Disney+ first announced WandaVision, I was ready to skip it but I’m glad I didn’t because these two characters really get a chance to shine. The benefit here is that in the MCU, they don’t have all that complex history, and so the MCU can make their own stories. The first two episodes are a homage to the 1950s-60s sitcoms that we can safely assume a lot of the young audience probably would have never seen before. Despite that, it’s very charming and as the series continued the two leads, Wanda (Elizabeth Olsen) and Vision (Paul Bettany) continued to surprise me. Their ability to adapt their characters into different roles portraying different eras of TV is really impressive, with Olson really shining in her role.

WandaVision isn’t a superhero series, initially. It begins as a mystery, a sci-fi supernatural-thriller that slowly reveals more as the series goes on. The story starts off simply: Wanda and Vision move to a small town in Westview, New Jersey and start a family. They deal with many silly shenanigans as they try to conceal their true identities. However, in this world, who wouldn’t know these two are Avengers? They fought Thanos, they saved the world. It’s a strange situation, and feels Twilight Zone-esque as stranger things begin to happen. Mysterious voices asking for Wanda in the radio, a bright red drone that sticks out in the grayscale sceneries. A beekeeper comes out of the sewer, and Wanda commands, “No” and the man is gone, seemingly erased from the scene. It’s wild. 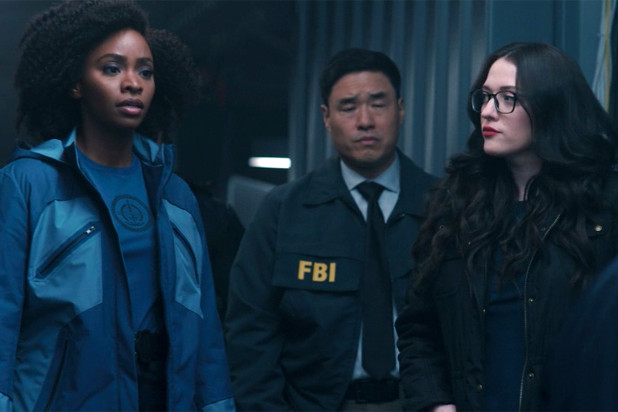 They are joined by Monica Rambaeu (Teyonah Parris) who plays the more typical role we expect from a Marvel Superhero series. On her side of things, people are trapped inside Westview, a strange forcefield keeps people from entering. Monica, who returned from the blip, has been tasked to investigate this anomaly with Jimmy Woo, an FBI agent. Monica worked for S.W.O.R.D, which we can call S.H.I.E.L.D but in space, her mother started it, and her mother had passed away in the fives years Monica was erased. She is struck with grief over her death, and uses it to motivate her forward. We have a completely separate storyline running side by side with Wanda and Vision’s story and it’s incredibly well balanced. The strange situations Wanda encounters like the radio call, the beekeeper are actually outside forces trying to enter this Hex as they describe it, to make contact with the people trapped within. It’s Monica and Jimmy Woo (Randall Park), it’s S.W.O.R.D.

By episode three, Wanda gets pregnant, and that’s when the series really begins to shine. We begin to realize that Wanda has a lot more control of the situation around her than we realize. As we uncover the truth, Wanda is painted in a new light, and I find this to be the boldest take in the series. Wanda in all honesty, is a villain here. She has trapped thousands of people within this time, and forced them to play roles in a sitcom for her new life. She remade Vision’s body to live with her within their home excluding his true memories. People are literally enslaved by her, forced to act out her whims. They suffer because of her. However, the real bad guy of the series isn’t Wanda, it’s grief, it’s loss. Wanda who has lost literally everything, has broken down and this is the result. It’s definitely inspired by House of M but without all the over complicatedness of tying in every other marvel superhero. It’s self-contained and that’s a boon. As much as I’d like to see Thor again, him showing up in New Jersey to reach out to Wanda wouldn’t make sense. However, Darcy (Kat Dennings) returns so that kind of counts.

This reality Wanda sculpted is her literally running away from the truth, and interjecting with her own. Vision begins to understand this himself, and in a sense he portrays her subconscious trying to reach out to her, asking her questions, pointing out oddities, like Agnes, (Kathryn Hahn) their nosy next door neighbor who always seems to be there right when they need her and always has just the thing they are looking for. Monica infiltrates the Hex, trying to reach out to Wanda herself  and ends up helping her deliver her twin boys, a one day pregnancy. She mistakenly confronts Wanda about the truth, mentioning her brother Quicksilver, and Wanda ends the charade for a moment, and expels her from the “show.” This somehow gives Monica her powers, as coming in and out of the Hex has altered her. Speaking of Quicksilver, Evan Peters returns to reprise the role, it’s hilariously meta. It’s interesting but we also come to the realization that not everything is Wanda’s doing as she has no idea why he is here, and Wanda questions why he is so different.

As we continue further into the series, the mystery is pretty much solved. Wanda is losing her grip on her reality, her twins are aging rapidly. Another twist is Agnes revealing herself to be Agatha Harkness, an ancient witch from Salem looking to take Wanda’s power for her own and yet, at the same time, she becomes her therapist. Agatha takes Wanda on a Christmas Carol-like journey to the past to uncover the truth of Wanda’s powers. WandaVision is a retcon in a sense, bringing Wanda closer to her true comic book origins. She discovers she isn’t simply a product of experiments with an infinity stone. In fact, she was always imbued with the powers of Chaos Magic, making her a being stronger than the sorcerer supreme. Sucks to suck, Dr. Strange. This is where the show returns to the typical Marvel formula. While the Agatha reveal is exciting with a little video package, there really is no way you’d figure that out within the confines of the show. There was always something odd about that neighbor Agnes, but you’d never guess she was behind certain things, like Quicksilver returning.

In a sense, Agatha helps Wanda, exposing her to the truth, teaching her about her origins, and then mentioning that, her kids, and her husband are tied to this Hex she made, and taking the Hex down, also takes them away. On Monica’s side, acting director of S.W.O.R.D, Taylor Hayward acts as her antagonist, acting like a complete tool, thinking a drone strike could take out a woman with the ability to change the fabric of the universe. However, you come to realize his goal is strictly Vision, who he has replicated, and thus we get our White Vision and a way to bring Vision back into the MCU. While I enjoyed the other side to this story, it’s more generic and weaker than Wanda’s storyline and maybe that’s the goal, to be complimentary instead of standing apart.

The finale is about what you expect, Wanda accepts her role as The Scarlet Witch. She gets a badass new look that really brings together her comic and MCU appearance. Hex Reality Vision does some real talk with his replicated self and essentially uploads himself to the new body. They battle in the middle of the street as all Avengers love doing. Wanda defeats Agatha, and in a cruel fashion, traps her in Westview forever. Monica, who was written to be Wanda’s foil but pretty much sidelined, still does her part to help Wanda win by taking on Hayward’s operatives, protecting Wanda’s kids. In the end, Wanda says goodbye to it all, her husband, her children, and she accepts the reality for what it is. She drives away and doesn’t even try to make up for the weeks of mind control she put the citizens of Westview through. It’s a pretty somber ending but I like that not everything is okay. It’s okay to not be okay. The series was bold, it was different, and it was pretty unpredictable at first but it ends up doing what Ironman did, it sets up the future of the MCU. After the credits reveal something interesting, the cries of her children can be heard as she studies the spellbook Agatha left. Monica runs into a Skrull who makes a reference to meeting Nick Fury. And somehow, the MCU has me hooked for another 23 films.